Cllr Tania Doyle on ‘that road’

Within the National Transport Plan, it is planned that a link up will be developed between the N3 and the N4. This routing has proved controversial particularly in that a route through the Green Flag Public Park @ St Catherine’s was proposed by way of “an indicative line” within the County Development Plan 2017-2023. This “line” would link up with the existing road network of Dublin 15 particularly in the vicinity of Ongar/Beechfield and Littlepace. This combination would clearly be irrevocably detrimental. I have been a vocal supporter of the Save St Catherine’s Park campaign launched a number of years ago by the community in Leixlip/Lucan. In the last term my own lobbying was instrumental in having the proposal to have a deviation to the County Dev Plan instituted which has lead to Officials of the Council and the NTA engaging on how to advance. I have tabled a Question for response @ the Local Area Meeting on the 05th of Sept as to the status of the engagements and I will advise you as soon as I have it.

I have attached a copy of existing routes linking the N3 to the N4 and vice versa. It is an extract from a scoping document prepared for Transport Infrastructure Ireland and it’s clear that a majority are through or adjacent to already max capacity residential housing developments. However one existing route is clearly the most suitable and it’s Route 5 (Pink). It routes North West of Clonee and as such avoids major developments within D15. In essence it routes through essentially “greenfield” areas whose existing road network can be appropriately developed to accommodate the link route and it does not route through St Catherine’s Park either which preserves the integrity of this Green Flag amenity.

I’d like to hear your own thoughts on this which I can take into the Chamber next week, post on FB or email me – tania.doyle@cllrs.fingal.ie

Posted on September 8, 2019 by savestcatherinespark

Our Park Is Not Safe! 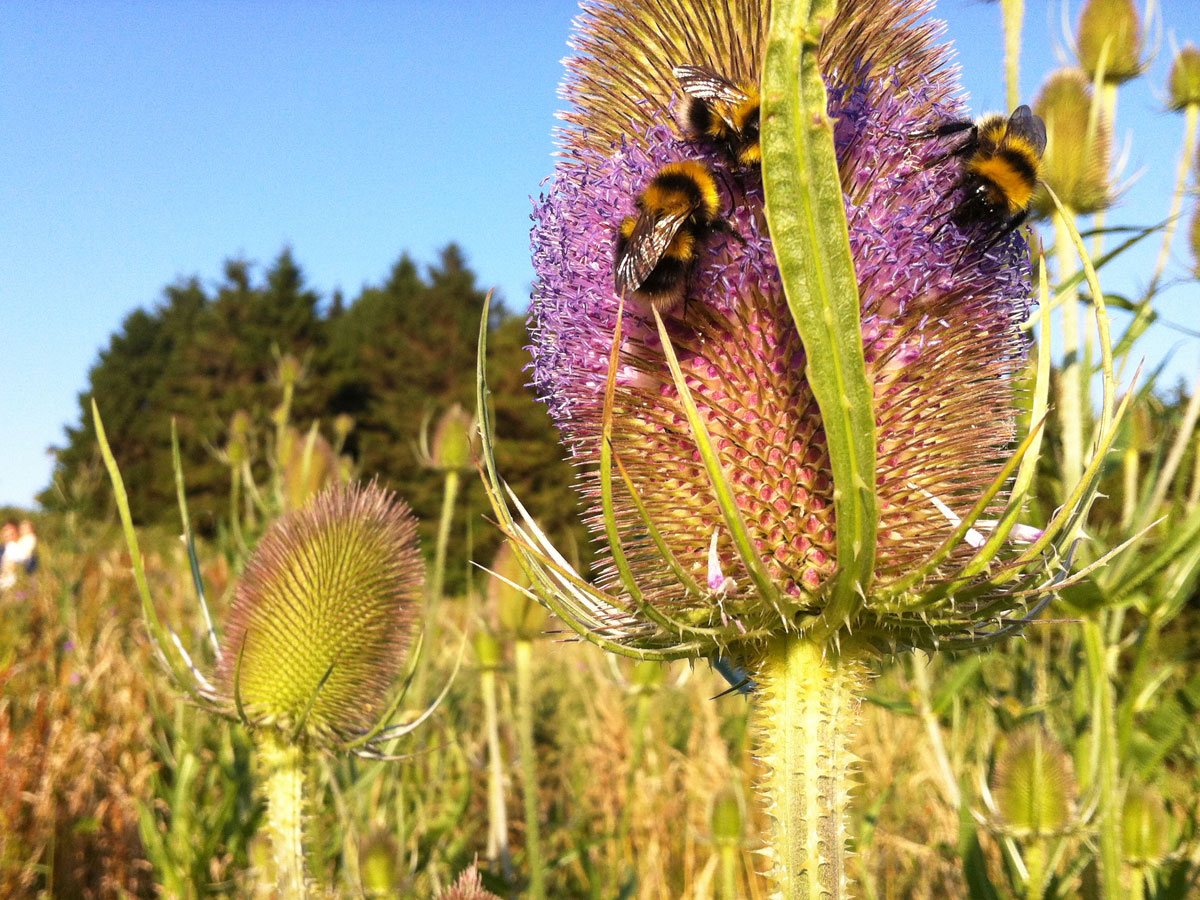 You could be forgiven for thinking our park is safe. It is sadly not so.

Many of our group members who use the park regularly are meeting people all the time, and we hear feedback from them that they believe the park is safe. Great news! But they are wrong. And here’s why.

Transport Infrastructure Ireland (TII) and the National Transport Authority (NTA) are actively looking at route options to join the N4 to the N3. This is not dissimilar to the Fingal Co. Co. ‘indicative line’ road which cuts through the park.

Our group met with TII and the NTA’s Director of Transport Investment, Hugh Creegan earlier this year, and learned that a study is underway to identify routes to join these two motorways.

The initial report identified 11 routes, 4 of which go through St. Catherine’s Park.

The next phase is to identify a preferred option. Even an avid gambler would not take those odds, if offered. And we don’t like them either. And nor should you.

So we, as the Save St. Catherine’s Park Group, will continue to fight and pressurise those in charge to remove our fantastic park from this study. It may make sense to build such a link road, but it makes absolutely NO sense to plough it through one of the best public parks in the province.

Posted on July 31, 2019 by savestcatherinespark

We’re having a gig to raise important funds for the sensory garden. All the details are in the poster. Please come along and support this great cause. 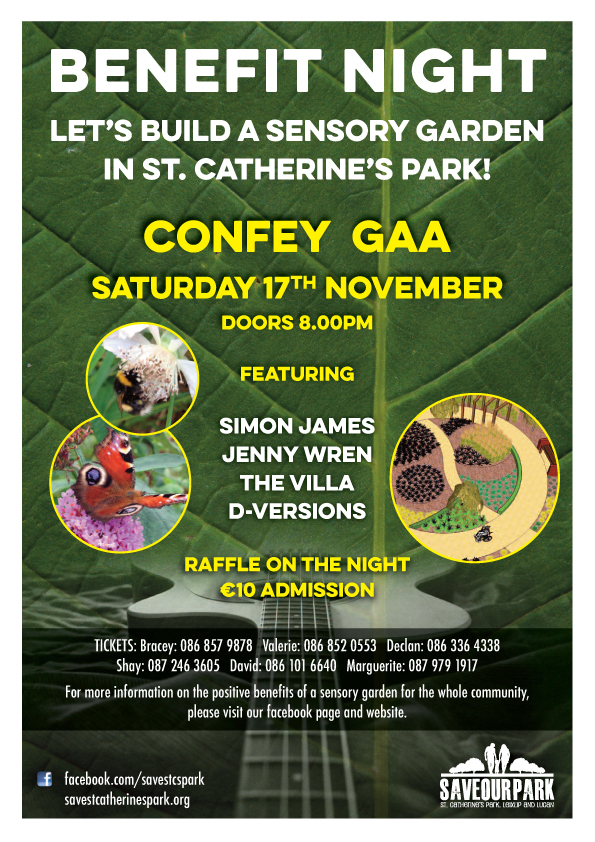 Posted on October 10, 2018 by savestcatherinespark 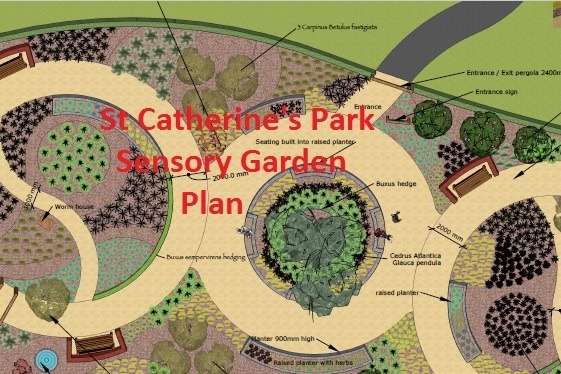 We are Save St Catherine’s Park Group and the park in question covers a large area of North Kildare and West Dublin. It is an ancient site with ruins of a 12th century penal church and includes St Catherine’s Well, where it got its name. There is a playground for the children, a BMX track for the sporty, along with numerous playing fields and woodland trails. There is even a dog run for our canine pets to run free. We have a beautiful park.

Unfortunately, there is no facility within our park for people with disabilities, physical or mental. We would like to change that by introducing a Sensory Garden. This will ensure the park is inclusive of all members within our society.

We envisage a Sensory Garden with emphasis on access, colour, touch and sound.
Seating will allow for reflection and/or interaction with others, depending on where people choose to sit along the wheelchair-friendly pathways. The garden will be situated in close proximity to a car park for ease of access. Signage will include braille. A professional design has been drawn up, and work should begin in Spring 2019.

To date we have received a Pride of Place award from Intel who are delighted to become involved in such a worthy cause. Kildare County Council have given permission for this project within St Catherine’s Park and an application has been sent for an Enhancement Grant. Local Councillors are aware of this plan and we hope for a donation from their December budget.

However, we need help to meet our target of €50K. The group have a bank a/c with AIB in Leixlip. Details can be provided.

Thank you for your time and we hope you will give the Sensory Garden consideration for funding as it will benefit communities across a wide area.

Posted on November 14, 2017 by savestcatherinespark

This week is going to tell us a lot about local politics. Local government has been steadily eroded and the Fine Gael party have been at the forefront of this. Abolishing town councils and bypassing local authorities’ abiity to make judgments on housing developments over 100 houses are just two of the ways recent governments have effectively emasculated local decision-making.

Recently, elected councillors of Kildare voted to amend the Local Area Plan for Leixlip to read “No road proposal shall be considered by the Council through the park within this Council’s ownership or jurisdiction.” The park is of course, St. Catherine’s. It is a welcome addition, though most sensible people would not understand why this should even be required. It’s like putting up a sign saying ‘don’t litter’. Should it not be obvious? Should it even need to be said that one of the province’s best regional parks on the borders of north Kildare and Dublin should need to be so protected?

Well, it would seem so, as the National Transport Authority (an offshoot of the Dept. of Transport) are now pressurising our local and democratically-elected councillors, and the unelected officials. They are telling them, and by extension, us, that such an amendment ‘”omits a potential option to enhance orbital movements…” and therefore the reference should be deleted.

Put another way, the Dept. of Transport still want to put a big road through your park. We should not be fobbed off any longer with such double-speak. And the same powers-that-be won’t stop there. They are also insisting that the local councillors rezone land at Confey for housing, despite no proper planning taking place as regards flooding, road access, water, waste, environmental impacts, archaeological studies, etc. The sensible approach adopted by the elected officials in Kildare was to leave the land zoned as agricultural until such studies took place, and then, and only then, would they consider adopting some form of Confey Masterplan for housing developments.

But this is not good enough for Damien English TD, Minister of State at the Department of Housing, Planning and Local Government, nor his colleague Eoghan Murphy TD. This does not make the figures look good. The Ministers are demanding house numbers, and they are not fussy where they put them. For those reasonably familiar with Leixlip, imagine taking pretty much all the housing stock from Captain’s Hill to the canal (St. Mary’s Park, Avondale, Newtown Glendale, Glendale and Glendale Meadows, River Forest and Woodside), and then duplicating all these houses and dropping them in to a few fields in Confey, north and east of the GAA grounds and the graveyard. About 1,700 houses all told. That’s what is being suggested.

The Save St. Catherine’s Park group is not about housing. It’s about protecting one of the best public amenities in the county. We lobbied Fingal Councillors and they agreed to amend their own development plan to remove any reference to a road through the park. And we are calling on our own councillors to do likewise. As long as there is a threat of a road, we will keep working to remove it. And as you may recall from early versions of the Leixlip Development Plan, housing at Confey would need to be serviced with a big road. A consultancy firm suggested a road through the park. Not only would it cost a fortune, it would also destroy this wonderful amenity. The plan sparked outrage and the road proposal was quickly withdrawn.

What is happening both in Celbridge (Donaghcumper) and here in Leixlip is nothing short of shameful bullying. Ironically, in the current climate of equality and anti-bullying behaviour, you could be forgiven for thinking that this sort of carry on would not be allowed. But this is the way your modern Irish government wishes to run their affairs, and they don’t really appreciate it when we, the local people who would seem to live in the real world, have the temerity to disagree with them. Not only is this allowed, it’s policy.

You may not always agree with your local elected councillor. They may not be from a party you vote for. They may suggest and vote for things that you do not agree with. But on this score, they should not be bullied by any minister, and they need your support.

Get in touch with your councillor and ask them to keep the protection offered to St. Catherine’s Park (Material Alteration 31), and secondly, tell them you want to allow the Masterplan for Confey to be examined properly, prior to any rezoning (Material Alteration 2). Tell Peter Carey, CEO of Kildare County Council too, and his colleague Peter Minnock, Director Of Services – Planning & Strategic Development.

There is a reason why we still have local authorities with elected councillors. And hopefully a reason why there are officials in Aras Chill Dara. They are not there to do the minister’s bidding. Oddly enough, until such time as we really don’t live in a democracy any more, they are there to do ours.

Posted on November 14, 2017 by savestcatherinespark

St. Catherine’s Park is a beautiful amenity between Leixlip in Co. Kildare and Lucan in Co. Dublin. To put a road through it would be a crass and hugely expensive act of vandalism. Join our campaign to have this road project shelved forever.