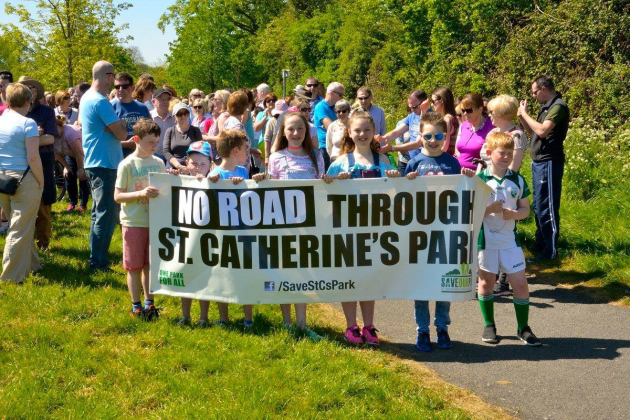 Why a road through a park?

If you have read some of the background on the park in the Park Overview section, then you will understand what a fantastic amenity St. Catherine’s Park is. You would therefore be surprised and possibly appalled that someone would wish to put a road through it. 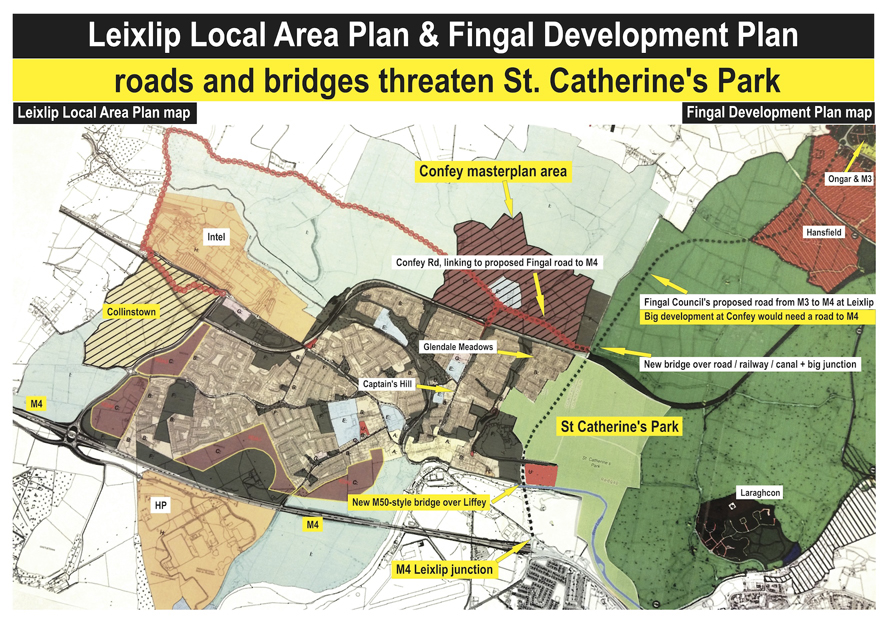 The Road – the basics

There are better and most likely cheaper alternatives if councils wish to join the M3 and M4 motorways.

This is NOT an anti-road or anti-development issue. This is about preserving and protecting one of the best remaining public spaces in the Dublin west/Kildare region. Ploughing a road through it is counter to every common sense argument about physical and mental health, public space, amenity and the environment. We fought too hard for this park to let it be destroyed now.

This road proposal MUST be removed from any plans, and the park MUST be protected now and for future generations.

If this planned road has been around for some time, why is it an issue now? The truth is that it was passed into Fingal’s Development Plans with very little fanfare, and as we discovered, not even the councillors themselves where aware of the implications of their vote. Sleight of hand from the planners? Or perhaps just an oversight? Certainly, for most Fingal Councillors, this part of Dublin is very much off their agenda, tucked away as it is in the far corner of the county, on the border of Kildare and another lcoal authority: South Dublin Co. Co.

This article from The Journal is a good read.

It really came to light when Kildare began debating its own Local Area Plan for Leixlip last year. One of the areas earmarked for development was Confey, to the north of the town. The problem with Confey is access. The local roads are poor, and getting into the town of Leixlip was going to create some serious issues, not least as it is serviced by a traditional stone bridge over the Royal Canal and railway line that is too narrow for two lanes, and is now controlled by traffic lights (not to mention a weight restriction).

When a consultancy firm was brought in to investigate, their report suggested anything over 200 houses would require a new link from the development, direct to the M4 motorway. The only route would be through the park. And the Confey development could grow to anything up to 3,000 houses in time. Or far more than 200. So there is a problem. With a quota of housing to fill, the planners in Kildare had a problem. They floated a few options for access to the Confey site, and one these was the route through the park. Public reaction was swift and furious.

With little time and no funding, a local group got together and called for a march in the park to protest against any plans for a road. We had no idea that 1,500 people would show up last May. The sun came out, petitions were signed, and the large crowd marched through the park and listened to speeches. It was a success, if you are purely talking numbers, bit more to the point, it showed us, and the politicians watching, that many, many people from far and wide cared deeply about this park.

The following month, the group handed in over a thousand signatures to Kildare Co. Co., and on online petition collected over 1,500. The pressure was on to ensure that Kildare Co. Co. would not bow to any demands from Fingal for such a road. And questions were being asked about new planned housing developments that had inadequate infrastructure.

The cat was out of the bag, and the public wanted to know how planners could consider putting a road through a public park that was hard-won. A park they had fought for, and collected money for (in support of Fingal, who were applying for funding to develop amenities in the park). It was then that the indicative line came to the fore.

One of the more farcical aspects of this campaign has been the constant obfuscation by the officials in Fingal Co. Co. Numerous planners have been contacted about this planned road on their development plans, and the response has always been to suggest that this is only an indicative line, or, put another way, just something planners do when they wish to suggest that a road would or might be needed in the future.

However, never at any stage have any planning officials at Fingal (nor indeed at either of the other two local authorities) denied that they would like to see this road built. In fact, a senior planner at Fingal told us that the road corridor was going to be ‘preserved from future development’ (or in planning speak, sterilised) in order to ensure that the road route would remain free for a future road to be built. That does indeed sound like, well… planning.

This of course flies in the face of the official line from the planners, which has always been to suggest that indicative lines are only suggested routes, and that if ever it was to go to a planning process, then other routes would be considered. No other routes have ever been suggested to us or to any elected official that we are aware of. In other words, as far as the Fingal planners are concerned, this route selection is a fait accompli, a done deal… Indeed, one planner remarked to our group that this road would be going ahead, and the road through the park would actually cross through Kildare’s section of the park, and not Fingal’s.

That’s quite some feat to pull off, if you can do it. Of course, in order to do this, you would have to have discussions with your neighbouring local authorities to get this road through, as it would need to begin its journey at the Leixlip interchange on the M4 at Junction 5, and then head north towards the Liffey. At this point, you would be in South Dublin Co. Co. land. Once across the Liffey, the road would then land in Kildare’s section of the park, before crossing both the railway and Royal Canal before finally landing in Fingal land.

So it would seem that Fingal, who have invested a lot of money (as have the public and local businesses) into the park, might try and foist their road onto a neighbouring authority.

Success, they say, has many fathers, whilst failure is an orphan. We have tried numerous times and without success, to find out who actually owns this plan, or to put it another way, who might eventually fund it. We have been bounced from Fingal to Transport Infrastructure Ireland to other bodies, and back again, and nobody seems to want to take ownership of this project.

And in another twist, a Freedom of Information request from our group to South Dublin County Council, it would appear they too like the sound of this road, but perhaps are not so sure about the route…

In their opinion, in other words, the road would head due north from the Interchange and pass through Fingal land. Fingal planners, when advised of this, have been quick to downplay any suggestion that the road would pass through their section of the park. Guess it’s bad for the image.

After strong and vocal campaigning from our group, a vote was taken in Fingal Co. Co. chambers in Swords, Co. Dublin (Sept. 2017), to unanimously remove this road from the development plan. This sounds on the face of it like great news. It took at least three full council meetings and a lot of lobbying to reach this point, and indeed, the group were delighted with the vote. But since then, nothing has happened. As far as the executive are concerned, the development plan won’t be altered until it is due for renewal in another five years. To alter it now, they say, would require material contravention; a rather cumbersome quasi-legal function that could open them up to further scrutiny on other decisions made in the plan.

So despite all the hard work with Fingal between the group and the elected officials, it would seem the executive are more than happy to have their hands tied (by themselves). This is one boat they do not wish to rock.

The Minister Says No

In December 2017, Minister Damien English stood up in the Dáil and gave a commitment that he would not build a road through St. Catherine’s Park. Again, on the face of it, this is good news. This came as the result of much lobbying and pressure via local elected representatives. Of course, this is strictly-speaking true: it is not this minister’s function to build roads. That is not his department. It is Shane Ross who oversees roads. But the real truth is that many of the figures in play at the moment will simply not be involved in decision-making if this road is to become a reality in the future.

Kildare’s elected councillors (in the Celbridge electoral area) had taken a similar stance the month before. It was all welcome, needless to say. But it remains to be seen how much of this support will stand firm against the almost unstoppable force that is urban sprawl in Ireland today. But that is not an issue one group can tackle. And it is not our issue. We simply want a cast-iron commitment that our park will be saved for now, and for future generations.

The campaign continues. Our Facebook page contains much more detail (in chronological order) of the path so far. It’s worth a read.

You can also keep up to date with newer posts by checking out the Blog section on this site.

We want to hear from you, good or bad. We welcome opinion and debate. And of course, we very much welcome your support and encouragement. If you want to get involved, just send us an email, and we’ll get back to you straightaway.

St. Catherine’s Park is a beautiful amenity between Leixlip in Co. Kildare and Lucan in Co. Dublin. To put a road through it would be a crass and hugely expensive act of vandalism. Join our campaign to have this road project shelved forever.